HomeLaboratory of Physiology and Biochemistry

Laboratory of Physiology and Biochemistry

Laboratory of Plant Physiology and Biochemistry 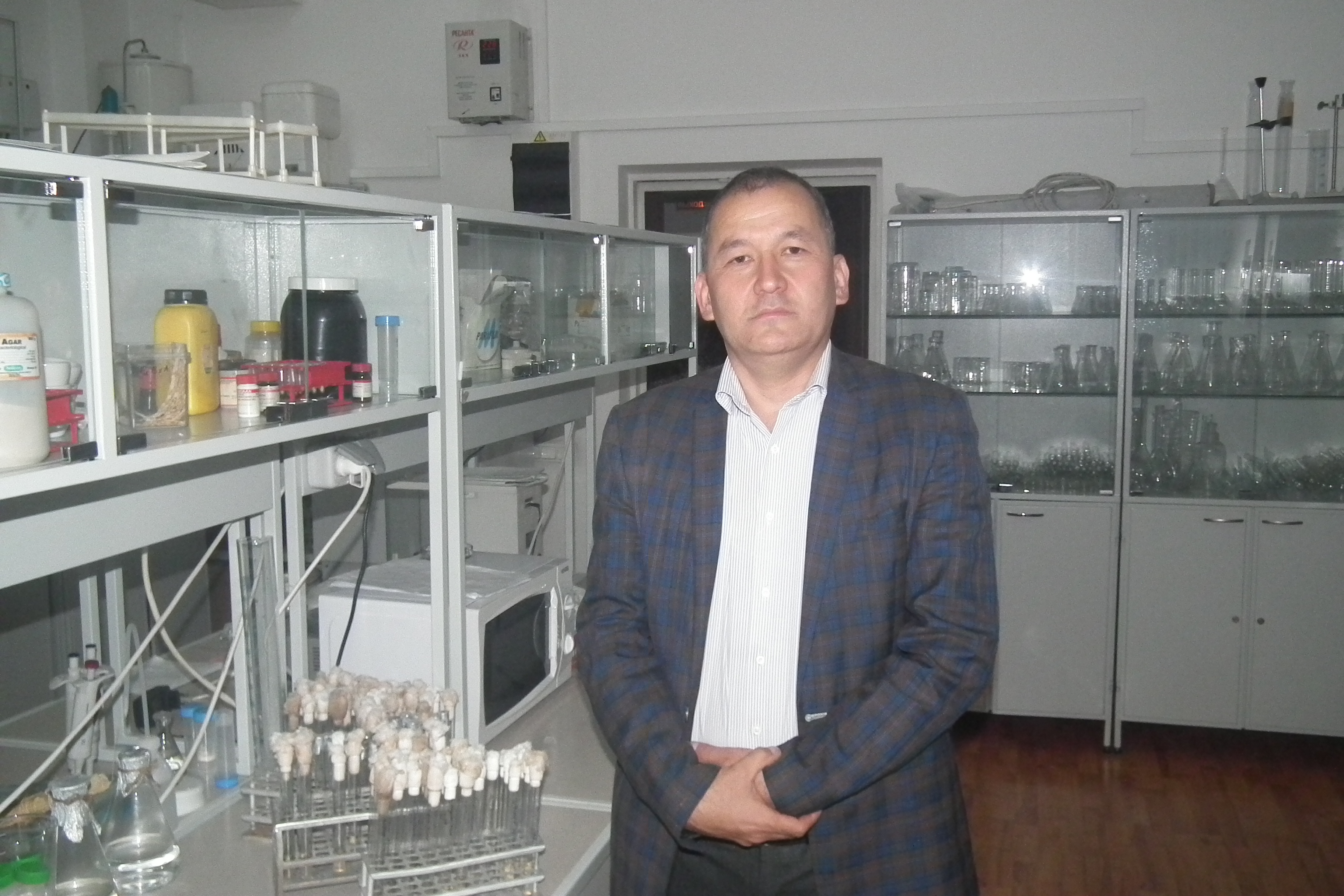 Main directions of scientific activity of the laboratory

-physological and biochemical research and sweet sorghum breeding in the conditions of the southeast of Kazakhstan to diversify crop production and using in the food industry, fodder and bioenergy;

-development of phytoremediation technology for the remediation of contaminated with pesticides and heavy metals in soil zones of creating a food belt of the Southern and Eastern Kazakhstan;

-development of methods for phytoremediation of soils contaminated by pesticides on the basis of the construction of plant-microbe symbiotic systems;

— the creation of new varieties and original forms of barley cultivation under drought and salinity using conventional breeding and haploid technology;

Collection of seeds of sweet sorghum varieties. Experimental data reflecting biological productivity, sugar, juiciness, and resistant varieties of sorghum to adverse environmental factors such as drought and salinity contamination with heavy metals. From stems of sorghum squeezed juice and prepared syrup for useing biotechnology production of bioethanol. It was determined the optimum temperature, pH and the ratio of yeast cells to the fermentation substrate sorghum syrup, and the production of bioethanol. It was obtained experimental samples of bioethanol.

It was identified perspective varieties of sweet sorghum of domestic and foreign selection, different sugar content and productivity. It was shown that the variety Porumbeni 4, Alga, Rostov, Uzbekistan-18 were more productivity, also Kazakhstan varieties (Kazakhstan-20, Kazakhstan 16) differ juiciness and high content of soluble sugars in the stalks. Biochemical analysis of the syrup from the juice pressed from the stems of sorghum showed the presence of proteins, fats, carbohydrates, and biologically active substances such as vitamin A, PP, C, E, B-carotene. In the syrup composition was found microelements — Fe, Cu and Zn. It was designed standard organization for syrup from sweet sorghum stalks. It was developed the reciep of new food products and obtained innovative patents RK.

As a result of crossing varieties of sweet sorghum with each other and sterile lines (CMS) were obtained hybrids with economically valuable traits. Hybrids derived from crosses of the Kazakhstan × Larez 3 , Niskorosloe 81 × Larez, MSL-26 × Larez and Niskorosloe 81 × Saharnoe 32, MSL-26 × Saharnoe 32 showed heterosis effect. Perspective hybrids were selected for using in breeding to create domestic sweet sorghum varieties resistant to adverse environmental conditions such as drought and salinity, as well as productivity and sugar content of stems. The dynamics of the accumulation of soluble sugars and patterns of their distribution in organs and interstices.

The technology of phyto soil cleaning contaminated by pesticides and heavy metals with the help of wild species of plants Kazakhstan’s flora and methods of disposal of contaminated phytomass.

A new high-yielding, precocious, and salinity-resistant barley variety called “Kaisar” (sample 9/95-26K), submitted to the State Enterprise “State Commission for Variety Testing crop” of the Ministry of Agriculture of the Republic of Kazakhstan (Ministry of Agriculture). The variety is highly resistant to salinity, to late spring frosts, can withstand prolonged lack of rain and high temperatures during the tillering, resistant to dust and smut and Fusarium root rot. The average yield of 17.6 c/ha (Asem standard — 14.2 c/ha).

A new high-yielding variety called “Argul” (sample 3/04-4), submitted to the Ministry of Agriculture GKSISK for cultivation under poluobespechennoy rainfed and irrigated lands of Almaty region. The average yield of 45.2 c/ha (standard — 33.9 c/ha).

A new high-yielding variety of barley called “Birlik” (sample 28/98-3), submitted to the Ministry of Agriculture GKSISK for cultivation under poluobespechennoy rainfed and irrigated lands of Almaty region. The average yield of 47.6 c/ha (standard — 38.1 c/ha).

A working collection of accessions of colored and identified perspective early maturing red rice genotypes, ripening in the Almaty region. Selected parental forms with colored rice and hybridization carried out the work. In the context of the Almaty region propagated hybrids of F2-F3 generation of colored rice. Spend Hybridological analysis and studied the nature of inheritance of pericarp color and its variability in the later generations.

It was identified polymorphism of storage proteins of rice seeds (glutelin) hybrids, which is possible to identify perspective low amylose line.

Works on genotyping with primers G/T SNP-polymorphism in the first intron of the gene Waxy-35 rice cultivars and accessions of the Russian and kazahstankoy selection. When screening the studied samples of rice primers In1-F-T and In1-F-G in the presence of SNP- polymorphism (T/G) revealed two alleles at glutinous samples. The use of molecular markers is an informative tool for the study of polymorphism of Waxy-gene in glutinous rice genotypes.

Homozygous promising F6 line of the hybrids for further testing as a basis for creating glutinous varieties.

“Getting initial lines of glutinous rice and breeding them for exclusive children and dietary foods” (2012-2014);

“Development of new biotechnological approaches to create dietary supplements, special foods and their components, based on the interaction of natural biopolymers and other biological materials with the macro-and micronutrients” (2012-2014);

“Development of biotechnology to create new dietary supplements and dietary products based on the cultivation of food and processing sweet sorghum” (2012-2014);

“Biotechnology and the creation of new highly resistant to abiotic factors and forms of sugar sorghum lines for use in bioenergy, food and fodder production” (2013-2015);

“Biotechnology of obtaining of the first Kazakhstan colored pericarp rice (red and black) forms and lines as an initial material in breeding exclusive domestic variety” (2013-2015);

2171/GF 4 «Screening for the productivity and sustainability of sweet sorghum varieties for cultivation in drought conditions and for using of bioenergy, food and feed production» (2015 -2017);

The Federal Research Center Institute of Cytology and Geneticsthe Siberian Branch of the Russian Academy of Sciences;

Laboratory of Ecology Biosphere Center of physical and chemical methods of research and analysis of the Al Farabi Kazakh National University;

The list of employees who have undergone training at the international level:

— Researcher Sartbayeva I.A. was an internship from 15.10. till 15.12.2015 in Hokkaido Agricultural Research Center (Sapporo, Japan) on the theme “Modern molecular-genetic methods for the rice breeding”;

Approval of the title of Professor MES DBN. Nurzhanova A.A.

Moraru G.A., Sarsenbayev B.A., Kirshibaev E.A. Perspective hybrids of sweet sorghum to the Republic of Kazakhstan // Materials of the International Scientific Conference on the Biology and Plant Biotechnology, 28-30 May 2014. Almaty, P.370.

Innovative patent number 28674 on 20.09.2013, on the invention of «Enriched cereals of rice for quick cooking porridge.» Registered in the State Register of Inventions of the Republic of Kazakhstan 06.18.2014

Innovative patent №2969 «The process for producing enriched glutinous rice for quick cooking porridge.» Registered in the State Register of Inventions of the Republic of Kazakhstan 03.17.2015

Supervisors of diploma projects bachelors and masters of the university.

Printed matter, in particular monographs on the physiological and biochemical basis of plant resistance and technology of soil phytoremediation contaminated with pesticides and heavy metals.

Biotechnology of the syrup from sweet sorghum stems, prototypes of syrup and bioethanol.